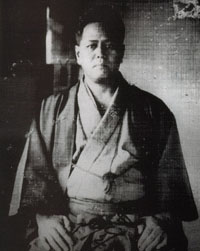 Chojun Miyagi was born on April 25, 1888 in Higashi-machi (Naha-shi), Okinawa. He was originally born as Miyagi Matsu, however his name was changed to Chojun a his age of five by his uncle, whom adopted him after his father died in 1893.

In 1902, when Chojun Miyagi was 14 years old, he started practicing Naha-Te with Kanryo Higaonna. After years of training with Higaonna, Miyagi went to China in 1915 in search of Higaonna’ s teacher. This was his first trips to China. He studied Chuguku Kempo (Chinese Fist) in Fouchow, Fukien Province, from 1915 to 1917. In early of 1917, he returned to Okinawa due to the death of Higaonna Sensei.

After he came back to Okinawa, he began to teach his Karatedo around Naha, and then thoughtout Japan. Chojun Miyagi had combined the basic Go (Sanchin), the six rules, and created the Ju (Tensho) form. This is the combination of hard and soft movements. He also organized the auxiliary movements to strengthen the body through calisthenics and create the classical Kata.

Chojun Miyagi worked hard to spread Karatedo throughout Okinawa and mainland Japan, and to earn Naha-Te in a status equal to the highly respectful as Judo and Kendo. To achieve this he traveled frequently to mainland Japan where he was invited to teach Karatedo at Kyoto University and Ritsumei Kan University.

In 1933, Karatedo was registered at the Butokukai, the center for all martial arts in Japan.This was a milestone for Karatedo, which it was recognized on a level with the highly respected martial arts of Japan.

On March 23, 1934, Chojun Miyagi wrote a document Toudijutsu Gaisetsu (An outline of Karatedo), a very rare and very technical on the almost spiritual training of Karatedo.

By 1936, Miyagi is truly recognized by the Government of Japan with being awarded the medal for [Excellent in Martial Arts] from the Japanese Ministry of Education. That same year he went to train at the Chinese martial arts in Shanghai at the Seibu Dai Iku Kai or Great Gymnastic Association - Pure Martial Spirit.

Chojun Miyagi lectured his students on history, culture, society, human relations, and not limited to physical training. During these sessions Miyagi Sensei would teach Kata (Form) in great detail and explain the bunkai (application) thoroughly.Chojun Miyagi dedicated his whole life to Karate. He was responsible for structuring Naha-Te (which is later Goju Ryu) into a systematized discipline which could be taught to society in general. This teaching system formulated enabled Karatedo to be taught in schools for the benefit of the young and to reach vast number of people throughout the world. However, his private teaching at his home remained strictly in adherence to the principles of his teacher, Kanryo Higaonna, and his teacher before him, Ryuruko.

Chojun Miyagi passed away on October 8th, 1953. He predicted that Karatedo would spread throughout the world during twentieth century. Today we can see that his prediction has come true. Karate is not only practiced in Japan, not only be referred to as a solely Okinawa or Japanese martial art, but it can be found in the countries all over the World.